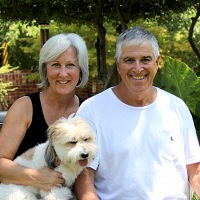 “It was refreshing to have someone from outside our business to give advice. We also received information to help in making contacts in certain market areas. It reinforced the fact that we need to do certain things to keep the business on track and advance it in the future. Thanks.”

I want to select a Mentor...

The voucher: has been applied successfully. Select the categories above to find best matching mentors, or click here to cancel this voucher.

Or that can help with...

What is your voucher code? Available Now Book with me

With more than 45 years in sales and marketing, Michael has a broad range of skills and a dynamic management style that emphasises customer service and satisfaction, corporate planning, staff development and financial control. He has mentored and coached many CEOs, CFOs, general managers, sales managers, service delivery managers, young graduates and start-up founders.

I can also deliver mentoring by phone and online

Michael uses his experience to run CEO forums, facilitate strategic planning and go-to-market workshops and conduct one-on-one coaching with CEOs. He has completed projects with dozens of companies, including AAPT, AMP, Telstra, IBM, Microsoft and NEC.

After holding management positions with Commercial Union Assurance, Ford Motor Company, NCR, Myttons Ltd and ACI Computer Services (now Ferntree), Michael was Managing Director of the Boulevard Financial Group before moving to Co-Cam Computer Group as Managing Director. In ten years, he turned it from a small custom software house with $1.3 million revenue into a software and IT group with revenue of more than $200 million, including $35 million in exports.

Michael was then Managing Director at Wang Australia for three years, following its merger with Bull HN Information Systems. Wang is Australia’s largest independent multivendor service provider. After the merger, it went from a combined loss of $19 million to a profit of more than $75 million three years later.

After joining AAPT as Southern Region Manager and AAPT Networks Project Director (VicOne), Michael worked on the strategic partnership between AAPT networks and the Victorian Government on the $500 million VicOne project, which developed the State Government’s Broadband Multimedia Network. His leadership helped the project meet key milestones, including connecting 1739 schools in eight months.

Michael also spent time as Managing Director of Maxi Multimedia, a joint venture between NEC and Aspect Computing. Maxi was a key part of the Victorian Government’s “On Line by 2001” strategy. In six months, Michael improved sales performance by more than 200 per cent and put a strong management team in place.

From 2001 to 2004, Michael was Non-Executive Director of Newport Capital, where he set up Newport’s Melbourne practice and completed 47 projects involving capital raisings, mergers and acquisitions and corporate advisory projects. He also sat on the Boards of numerous public and private companies.